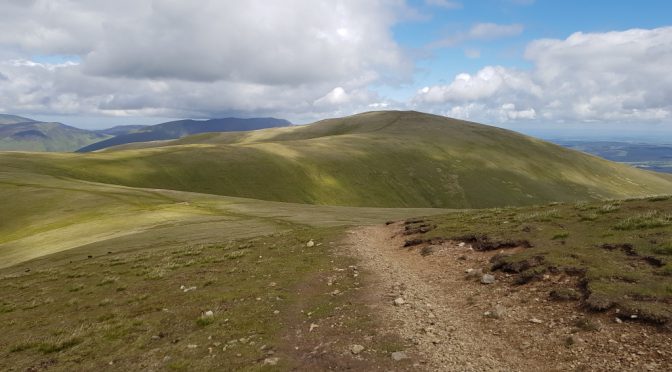 Some of my favourite walks are along ancient trackways – routes that have been followed for centuries or millennia by a huge range of diverse people. There is something very appealing about these paths, and the sense of lineage which attaches to them. Every country has such pathways – they might be for the purposes of trade, or pilgrimage, or festival, or war, or simply the best and most effective way to cross difficult terrain and link up with other communities. When you walk such paths today, you are quite literally following in the footsteps of many other people.

Often these paths follow routes which made perfect sense at the time, but nowadays seem odd – for example many of Great Britain’s ancient ways follow ridges, whereas modern transport networks tend to stay in the valleys. From the Ridgeway, or the North and South Downs ways, or the Pennine Way, or High Street running north to south above the eastern shore of Ullswater, you look down from tracks which are almost devoid of buildings, into plains and valleys full of settlements and the roads between them. Some of this shift is the result of the way Britain’s sea level has changed over the last ten thousand years or so, and the rest reflects shifts in vegetation patterns. We used to avoid the valleys because they were hazardous and, often, impassable… now we avoid the hills because it costs more to construct roads and railways there.

So far so good… but does this notion of ancient trackways migrate into science fiction? And the answer to that question depends on how the author has conceived of how travel works between inhabited settlements. In my Far from the Spaceports series, set in various habitats within our own solar system, there are no trackways. If you want to get from, say, the asteroid Ceres down to Mars’ moon Phobos, then you would normally reckon to get your ship’s computer to plan out a geodesic – a minimal-energy curve joining start to finish. If you’re in a hurry, you burn a bit more fuel, run the engines a bit hotter, and replan your curve. If you do the same trip a few days or weeks later, you’d go through similar calculations, but the inevitable changes in orbital positions of the two celestial bodies in relation to each other mean that the second path won’t follow anything like the same track through space.

The same applies to the (excellent) Amazon series The Expanse, also set in the fairly near future within our solar system. When the Roccinante sets off from Ceres to Io, the crew do not look back at previous journeys between those places – they calculate afresh the necessary orbital path. Similarly, but on a bigger scale between star systems, Star Trek and Star Wars pick out a flight path according to the star patterns at the time.

There are, however, a few science fiction books and films which presuppose fixed navigation routes between places. Joe Haldeman’s Forever War presumes that journeys had to take place between specific collapsars, meaning that only certain trips are feasible, and the most effective way to travel from start to end may well not be anything like the straight line route. The Mote in God’s Eye, by Larry Niven and Jerry Pournelle, hypothesises the existence of “Alderson Points”, which are the only entry- and exit-points around particular suns. Again, some journeys are possible and others not, and trips between the same start and finish points must necessarily use the same Alderson Points. Stargate has something of a hybrid – the original travel means was by means of wormholes rigidly linked to particular planets – once again, some journeys are possible and others not. However, this was quite quickly relaxed with the introduction of spaceships travelling at superluminal speeds, and the consequent ability to go wherever you liked.

So different authors have had to choose between pathways and navigation when considering space flight, and by far the majority have chosen navigation. All of which, considering my personal delight in following ancient trackways, makes me consider how I could work out such a plot into my own writing.