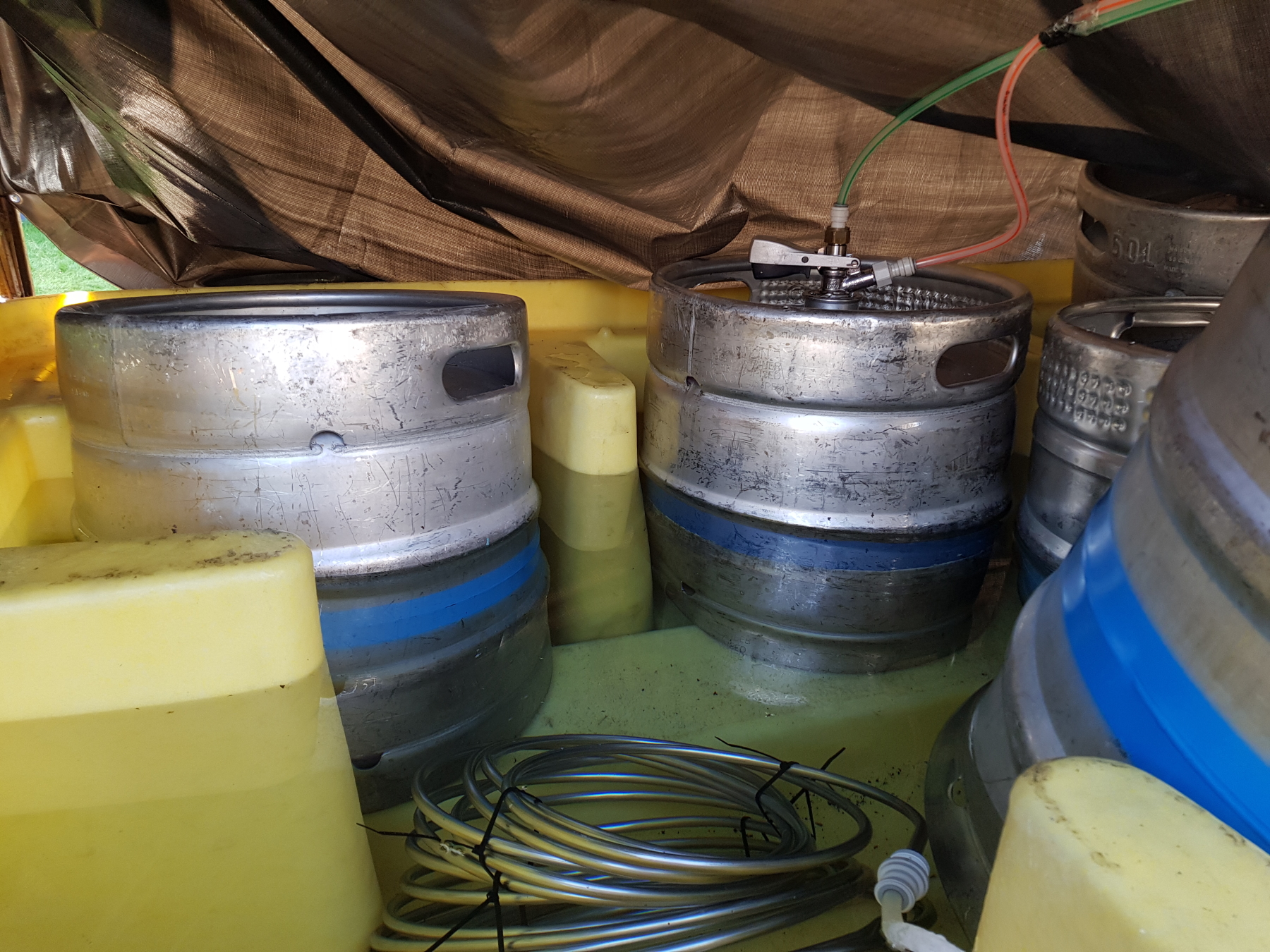 This is another of my occasional posts on the general theme of “how would you do such-and-such in low or zero gravity?” Lots of things which we take for granted down here on the surface of the Earth become surprisingly difficult or awkward if you find yourself in the microgravity of orbit, or on the surface of a body where the gravitational pull is very much less than what we enjoy here.

Today’s topic is pouring beer, and originates from the annual Grasmere Sports Day – an event held on the Sunday of the Bank Holiday weekend at the end of August. As you can see, it was a sunny day – even a hot day – and these have been in short supply ever since. But that day was hot, and we had the task of running a beer tent where people would expect cold lager right through the day. (Or any of several ales, or fruit cider)

Now, the business of making the kegs cold was handled by means of what was basically a very large cold-water bath – cooled down with a heat exchange loop overnight, then kept that way through the day. A reflective tarpaulin kept the sun (mostly) off, and the refrigeration loop did the rest. All that part would not be appreciably different in low gravity – keeping things cold in space is not generally a problem in the situations I have in mind (I’m not planning on colonising Mercury any time soon).

Let’s think what happens next, The drink is pushed from the keg to the dispensing unit by gas pressure. This might be the pressure of gas generated during fermentation, or some extra assistance from a CO2 or mixed-gas cylinder, and typically is a mixture of the two. Again, no problem here at all. Gas will push liquid along a tube in lots of gravity or none, basically because gases are compressible and liquids are not. So on Earth or in orbit, the beverage is pushed through a series of tubes from keg to hand-pull or font. No problem there.

But then we get to the actual presentation to the person wanting the drink. Here on the Grasmere Sports field, the drink poured downwards from the hand-pull or font into the waiting glass. Liquid at the bottom, little bubbles rising nicely towards the surface, a suitable amount of foam on the top. Everyone was happy. But now translate that into orbit. Out here, there’s no up or down worth speaking about. The liquid is propelled straight out of the delivery tap. It splashes on the sides or far end of the glass you are holding there, and then (probably) just bounces out again. There’s no gravitational incitement to remain in the glass.

You mop up the mess, think about it, get a container which has a lid, and try again. That’s fine – the lager now remains where you wanted it instead of drifting all around your living space. Except it has no motive for remaining at the bottom of the container, since there are no gravitational clues as to what is the bottom. My suspicion is that it would break up into a number of large blobs, fusing and separating rather like an old-style lava lamp. Now suppose you got yourself a transparent container so you could still see the head… what’s happening here? The bubbles aren’t rising to the top… because there is no top. My guess – and it is a guess – is that the internal hydrostatic pressure would mean that bubbles go out from the inside of each disjoint blob of fluid towards the surface. If I’m right, then each blob will have its own set of bubbles going out radially, and each will have a roughly spherical head surrounding the liquid. It’s a fascinating thought. How would you drink such a thing? Two ways, I suspect: either you’d use a straw through the lid and suck up each blob in turn, or you’d choose a container that you could squeeze like a toothpaste tube. Not so visually exciting as quaffing your pint out of a glass, but at least you’d get to have the drink.

It’ll be a while before we face that problem for real, but my suspicion is that the brewing of beer (or an equivalent beverage) will follow very hard on the heels of any human colonisation of the solar system at large. And it’s certainly worth including in a near-future science fiction story – I put a little bit of detail into Far from the Spaceports about the Frag Rockers bar out among the asteroids, but back then I hadn’t had the chance to consider it in more detail. But there were little details like “You’ll need to go to Frag Rockers to get anything decent. Regular fermentation goes weird in low gravity. But Glyndwr has got some method for doing it right. He won’t tell anyone what.” Maybe one of the books in this series will explore the matter in more detail.

That’s it about fermentation today, but I was intrigued to read that NASA have been experimenting with the manufacture of cement up in space – see this link for a description together with some comments on structural differences between the same stuff made on Earth and in orbit, or this link for my own ramblings about the process a few weeks ago.

And finally, condolences to the Indian space agency ISRO for the loss of signal from the Vikram lander, during the final stages of approach. The orbiting observatory part of the Chandrayaan-2 mission is still working as expected.