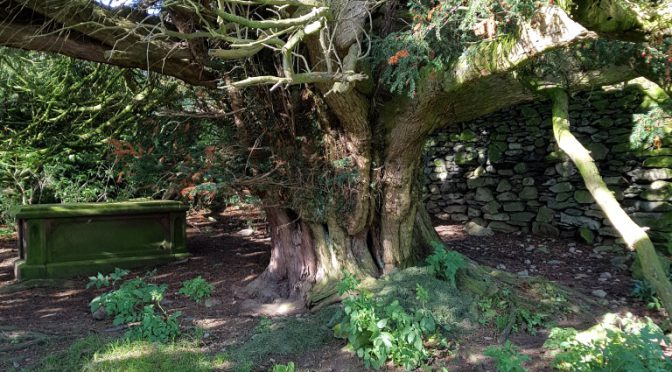 As a digression from my recent science fiction posts, here’s one about the natural world, and its intersection with history. I have been reading through the Royal Botanic Gardens’ book The Immortal Yew, written by Tony Hall, and finding it fascinating.

The first part of the book covers, in a kind of whistle-stop tour, various snippets of curious facts and suppositions about yew trees, while the remaining 4/5 lists a total of 76 particularly impressive yews around the country. Most of these are in England and Wales, with a few in Ireland and one in Scotland.

I guess most of us encounter yew trees in churchyards – the jury is out as to whether the origin of this custom was spiritual (yew trees have symbolised immortality and resurrection in more faiths than just Christianity) or practical (it stopped farm animals from grazing their way through the graves). Either way, this location has meant that the trees were protected from casual lopping, and so have survived. And indeed the majority of the showcased yews are in churchyards.

It is surprisingly hard to determine how old a yew tree is – the main trunk hollows out after a few centuries, losing all the heartwood and almost all the associated tree rings. To add confusion, a few centuries later still, the tree puts down another central shaft which, as it were, grows in place of the original trunk. All the while, the original bark keeps growing around the outside like a kind of shell. Low branches drape along the ground and frequently put down their own roots, resulting in a cluster of rooted trunks. It is often hard to tell whether we are looking at a single tree or several grouped closely together. Historical records can help, and typically tell us that some of these yews are well over a millennium old. How much over a millennium? We just don’t know, but there is circumstantial evidence that yews can live for perhaps 3000 years. Such trees considerably predate the churchyards they find around them. It is likely that yews are the oldest living things in Europe. The Martindale Yew (close to Ullswater lake) may well be 1500 years old. The church building (known as Old Martindale church, to distinguish it from the new one up the road) dates back to 1220 – a respectable age, but dwarfed by the tree it nestles beside.

With such antiquity, and a whole slew of medicinal and military associations, yews have a firm place in European folklore. One snippet I particularly liked related to Yggdrasil, the Norse tree of life connecting the various worlds. Normally reckoned to be an ash tree (Wikipedia certainly thinks so), the references in the Poetic Edda suggest it is both evergreen and needle-bearing… neither of which applies to ash trees. Was Yggdrasil a gigantic yew tree? Seeing some of the magnificent specimens photographed for The Immortal Yew, it is easy to think so.

So next time you are near a churchyard, drop in to say hello to the yew tree which will almost certainly be growing there, and think about what it has witnessed during its lifetime. Each and every yew has quite a story wrapped up in its substance, and could be woven equally into history or fantasy.

4 thoughts on ““The Immortal Yew” – Some Thoughts”