Only a short blog today as I am out and about at the moment. But I had cause earlier in the week to contemplate the different ways that people approach their writing. I emphasise that I am not at all talking about whether an author has published many or few books, or whether they make a good living or not, or any of those tangible markers of success. The thing that struck me is whether people approach writing from the point of view of “playing by the rules” of their own culture and/or personal preference, or exploring alternative points of view.

Personally I don’t think that there is any one ideal narrative style (still less that narrative style is in some way written into our DNA) but rather that particular cultures tend to throw up styles that suit them. The dominant cultures in North America and Europe have settled on a particular way to tell stories – you see it perhaps in its most obvious form in Hollywood films which self-consciously set out to follow the pattern, often as a kind of in joke overtly signalling the transition points to knowledgable audience members.

My own studies have convinced me that not all cultures have chosen to do this, and I cannot persuade myself that the current US/European paradigm is automatically the best! I have written a number of times before about chiasmus as a structural feature – key events and plot themes are placed at the centre of the work, with successive envelopes forming outer layers around that. You see this a lot within Middle Eastern writing, especially pre-Christian writings. It is perhaps striking that the Hebrew parts of the Bible (the Old Testament) display this structural habit of thinking much more than the Greek parts (the New Testament), which tend to be more in keeping with our modern expectation of linear progression through difficulty to triumph.

I know much less about far eastern writing but have just finished reading “A Pair of Jade Frogs” by a contemporary author from Shanghai. 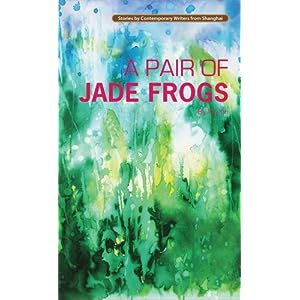 Here, by contemporary western standards the book seems to rather trail off. Key events and tensions are resolved earlier in the story. Only one narrative theme is pursued to the end, and that one is not closed off triumphantly but dissolves into uncertainty. I appreciated the different approach to writing, but I did wonder if the book would be criticised for not adhering to western standards of narrative form? Certainly some of the opinions I come across online would be very critical of this form, and certainly would not want to imitate it in their own writing. As for me, I really enjoy getting to grips with the many and varied ways that people have structured meaning over the years!