Today I thought I would post an extract from the in-progress novel The Flame Before Us. Before that, though, some review news. I am now signed up on the Indie section of the UK Historical Novel Society review group. So look out for some of these at the HNS site http://historicalnovelsociety.org/reviews/. The deal is that reviews must appear there first before being posted anywhere else (like here, for example). They should also be of a standard length and have a mixture of plot summary, personal response and comments on the physical production. From now on a small fraction – by no means all – of my reviews will be posted there first.

Back to the extract. The scene here is the fall of Ugarit (Ikaret). The city walls have been breached and small groups of people are cut off from each other and trying to escape. Anilat is the wife of one of the king’s envoys, and successfully hid in her house during the initial attack. 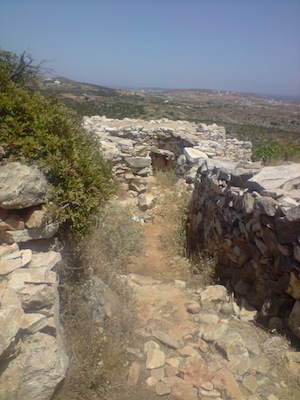 They moved outside. The lead soldier turned to her.
“Where to next, lady? Your honoured husband told me to set towards the shepherds’ huts on the hill road, but now you’re here the choice is yours.”
She nodded. “He said as much to me.” She looked around vaguely. “Which way should we go?”
One of the three shook his head. “Bugger that. I’m not going to any shepherd’s hut. I should never have come this far with you. I’ll take my chances somewhere else.”
Before any of them could say anything he had run off down a side street. She looked at the two remaining soldiers.
“What now? Will you leave us too?”
“No, lady. I gave my word to your honoured husband and I’ll see it through. Out to the huts at least, we’ll see you safe out to there. He’ll know what to do once we meet up, I’m sure.”
The younger man nodded as well. They went on a cautious way through the maze of narrow streets. Here and there in the distance they could hear and see the sounds of the city’s rape. Anilat followed the lead without thinking, not recognising any of the paths or buildings. It was one of the poorer regions, emptied already of its occupants. The houses pressed close together, and refuse and waste lay thickly in the corners and ruts. There had been little enough here to attract the invaders, but even so the shadow of their passage lay heavily on it.
Bodies of men and women, old and young, were scattered in and out of the buildings. Anilat’s own children trotted past the corpses with blank eyes, and Anilat herself was soon beyond noticing the marks of violence. Once, while they hurried across an open source near the top of a hill, they caught sight of a great mass of people pressed together along the main city artery, leading towards the great gates down from the palace and temple. There was a noise of confusion and inchoate pain, and the struggling crowd was illuminated only by the flames of burning buildings to either side. From time to time packs of men, like jackals, harried the edges of the crowd and snatched victims away.
Down by the docks the fires seemed to be settling into a steady blaze, while nearer buildings, more recently set alight, rushed up in sudden flurries of sparks. Anilat stopped to catch her breath at the highest point of the ridge and turned, trying to catch sight of her own house, but it was lost in the confusion. One of the soldiers urged her on.
They reached the open space in front of the middle gate. One of the soldiers eased his way slowly forwards to check that nobody was around, then waved the others on from where they had crouched behind some wreckage. The gate stood wide open, with its bolts and bars forced back. Two or three guards lay dead nearby, along with some other fighting men that none of them recognised.
The group slipped out through the gate. The path heading towards the ridge of hills to the east was clear and open. Apparently the city occupants were trying to escape away down the coast rather than inland.
They continued past a few bends in the track, keeping going until the city wall had slipped from sight and the way began to rise up from the coastal plain. The leading soldier looked at the women and children and called a halt. They turned to one side and settled among some stones, hidden by a screen of bushes from anyone moving along the road.
They shared out some food and passed around a skin of weak wine. Nobody spoke for a long time. Finally the younger soldier shook his head.
“I heard someone in the palace say that some of our own men opened the gates to them.”
Anilat looked at him in disbelief, but he persevered.
“And they rushed the walls like animals. With most of the army away north serving with the great king there were just not enough of us.”
The leader shook his head and took another swill of the wine.
“Seems to me they landed from those ships of theirs. The first fighting was down by the docks. Then some of them got through to the north gate and opened it up for the rest. When they defeated the few ships we had in home waters there was nothing to stop them.”
Auntie nodded. “The first fires we saw were down that way. Then it spread wider.”
Haleyna looked around as though she was only just realising where they were. “Where’s father?”

The novel as a whole follows the fortunes of several different groups of people caught up in the destructive migration that the Egyptians attributed to The Sea Peoples. It is about a decade later than Scenes from a Life. The historical events described here are a key landmark in the collapse of the Late Bronze Age cultures. Homer’s Iliad recollects the start of this wave of destruction: The Flame Before Us follows it on as it swept south through the Levant.