I was recommended Kumarasambhavam, “The Origin of the Young God“, by Kalidasa, by a friend who had noticed the reprint of the English translation by Hank Heifetz and alerted me to it. I have read a certain amount of modern Indian literature (in translation) so here was a chance to absorb a Sanskrit epic classic. Kalidasa is thought to have lived around 500AD, but most details of his life have long gone. His work, however, has proved to be enduring, and this is an exceptionally great poem which became part of the standard against which other works might be judged. 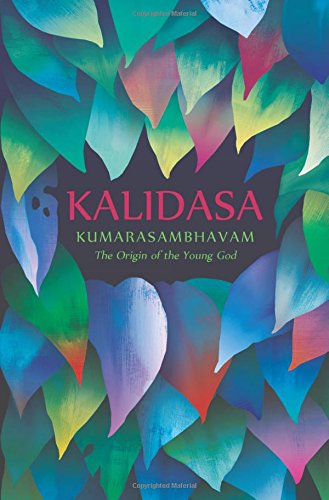 The theme of the work is the courtship of Shiva and Parvati, as imagined through their personal interactions, the participation of other individuals, and the rich echoes of their emerging love in the natural world. The 8th section celebrates their sexual union after their wedding. In due course this will lead to the birth of the Young God of the title, who will liberate parts of the natural and divine world from oppression. Over the years, this final section has been sometimes been regarded as an improper subject for poetry, and has often been omitted from published versions. To me this immediately brought to mind the Song of Songs in the Hebrew Bible, which has from time to time only gained acceptance by being read as allegory rather than literal delight.

For the curious, Heifetz explains the different kinds of metrical pattern used by Kalidasa, as well as highlighting other devices used, such as alliteration. He also speaks a little about his own choices in translation – when to be literal, when to add an explanatory phrase, when to try to imitate a pattern of sound. Sanskrit poetry was based on several patterns of long and short syllables, like classical Greek and Latin metres but unlike ancient near eastern or more recent European ones. This means that direct imitation of the variety of metrical forms, and their specific associations, is not possible in English, and Heifetz explores other ways of representing the differences.

But the poem itself can be read and enjoyed without troubling with any of this, so that the reader can immerse him or herself in Parvati’s determined efforts to win Shiva over, followed by Shiva’s gentle and sensitive arousal of Parvati’s desire. One of the outstanding features of the work is the extended use of imagery from the natural world – flowers, birds, animals, mountains, and the cycle of the seasons are all invoked and drawn up into the relationships of the divine couple.

At the end of the book I found myself filled with a great regret that the ancient Egyptians never had the opportunity to interact and cross-fertilise with ancient India. The ways in which both human and natural worlds participate seamlessly and shamelessly with the universe of gods became alien to Europe, but would have found a resonance in Pharaonic Egypt. Conversely, there is a haunting sense in some Egyptian literature that Egypt never really found another deep culture to relate to. I feel that there was a loneliness there that longed for, but never fulfilled, the possibility of being united with another. Perhaps Shiva and Parvati succeeded in marriage, where Egypt and India failed even to meet. But you have to wonder what kind of young god would have been the fruit of their union.

I have to give a star rating to post this review on some sites, even though that feels bizarre for an acknowledged literary pinnacle of its culture. Five stars, of course. The book will not appeal to everybody, but deserves to be better known and more widely read by those many people who cannot do so in Sanskrit.