I decided to classify The Elder Edda as historical fiction, on the grounds that the tales within it probably served a similar function in Icelandic culture – and general Norse culture – as that genre serves in ours. Certainly the content moves progressively from more obviously mythical, where the main focus is on the doings of gods and supernatural beings, towards history, where specific leaders and their followers are vying for political and military supremacy in a recognisable world. As such, it provides a rationale for particular clan allegiances or rivalries which are active in the authors’ time.

Buy The Elder Edda from Amazon.co.uk

Buy The Elder Edda from Amazon.com 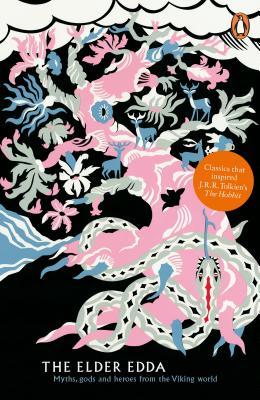 Andy’s translation seeks to be fluid but faithful, seeking also to preserve the stylistic differences between the various sections. This does mean that some of the poems read more fluently than others, depending on the style and form chosen by the original author. He also discusses the probable route by which the collection has reached us, via a Christian cleric who preserved it out of respect for his people’s lore. The myth and religion of the Norse world is carefully presented to us, but with the clear message that its day has long gone, and that even at its most noble it was heading unerringly towards its own destruction.

Norse poets, like their Anglo-Saxon contemporaries, took great delight in punning or riddling descriptions and names: Andy has recognised that no single tactic will solve this. Instead he has chosen several routes ranging from leaving names untranslated in some cases, using marginal notes of explanation in others, and converting into an English pun in others. He has also been flexible with issues of form, keeping remnants of the original alliterative style in many places without feeling constrained to maintain it everywhere. As well as very brief marginal comments, there is a much longer notes section at the end which gives contextual explanations into the background and subsequent use of the poems as well as translational points.

Readers even slightly familiar with Wagner’s operas will recognise names and stories here. But in addition, these same stories emerge in slightly changed form in Tolkien’s Silmarillion, especially in the long and tragic account of Turin. It is clear that Tolkien had enormous respect for The Elder Edda, and enough skill and confidence to creatively rework it into his own world.

How can one rate a classic piece of world literature? For me, this is a four star book. I intend to dip into it again, especially a few of the more accessible pieces, and I am very glad to have read it. In a few places I felt that the poetry faltered – translating poetry is extremely hard, especially when, as here, the translator is seeking to faithfully represent a selection of different voices. On balance Andy has done a good job.

The Elder Edda will not be to everyone’s taste, but it certainly is a milestone in the development of northern European culture and identity.